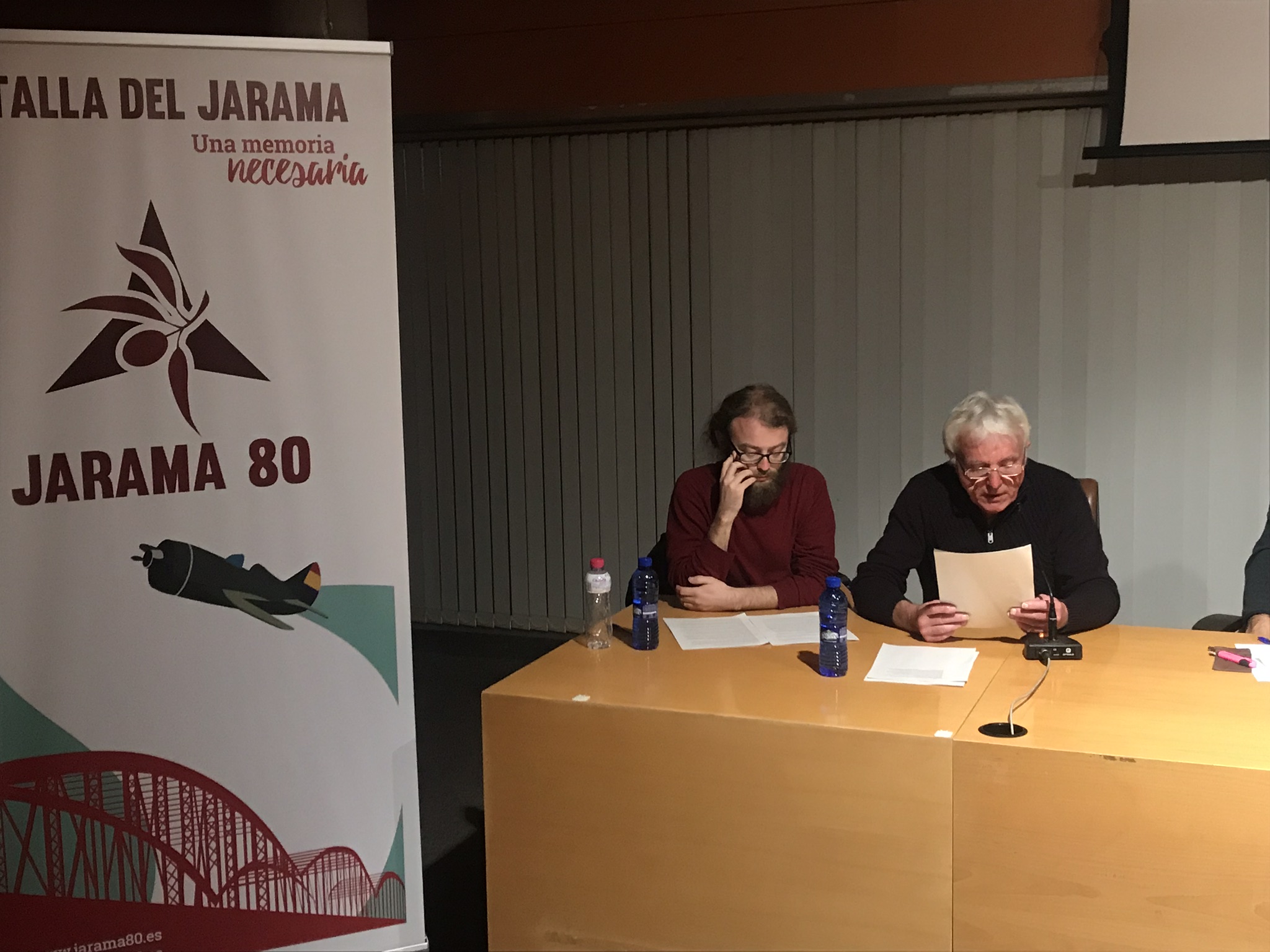 I would like to take this opportunity to thank everyone that has helped us here over the past 16 years. We do not need to explain our motivations to you – you share our passion and recognise the
importance of the International Brigades and the unique role they played, not only in the history of Spain but of humanity.

You have empowered us.

I would like in particular to extend my thanks to Rivas-Vaciamadrid. Since we engaged with you in 2008 in relation to the Charlie Donnelly monument, you have facilitated us in every way possible to ensure we could make it happen. Please take our continued presence here as a small token of our continued solidarity with you.

FIBI has now been active for more than 30 years in one form or another since our early days when we were known as The Friends of Charlie Donnelly – a tribute to the young poet soldier with so
much promise who, like countless thousands of others from Spain and across the world, was
cut down by fascist fire at the Battle of Jarama.

As an organisation, we have come a long way since our founding member Harry Owens led a delegation of more than 80 people from Ireland, including former brigaders, their friends and families, to Barcelona to commemorate the 50th anniversary of the brigade’s departure from Spain.

Since then, we have grown strong. And a key focal point has been our participation in the annual Jarama march, which began with Harry, brigader Bob Doyle and Seve Montero in 2003.

A group of us who first marched here in 2005 immediately proposed to build a monument to Charlie Donnelly and the other Irish brigaders who had fought, died and lay buried here. It was important for us to mark a place that the rich and powerful in our own country also want us to forget about.

This weekend FIBI will pay homage to those on the Republican side who died in the battle of Jarama, including 19 Irish-born brigaders. They were not only defending Madrid, they came here to defend the global ideal of equality against impossible odds. They were upholding a vision of a fairer world.

They came from a new generation of a radical political left that had emerged from the darkness that had befallen Ireland. Writers, poets, trade unionists, libertarians, socialists, communists, coming together to begin to create the just society dreamed of by the revolutionaries of 1916 before they were summarily executed by British authorities.

At present Ireland is marking a centenary of events around the foundation of the state. This began with 1916 and will end with what we would regard as the counter-revolution in 1923.

In 1919, Ireland’s first democratically elected parliament sat in Dublin. Most of its members were absent as they were hiding from British authorities or already in jail. The people had elected them on a radical mandate.

Three years later their hopes and dreams lay in tatters as the wealthy, backed by the might of the British Empire, ensured the new society would mirror the inequalities of the old one. The only difference would be a new flag.

Less than two decades later radical Irish republicans would distinguish themselves in the latest battle in the war against fascism. They swam against the tide to cross the sectarian divide that had been artificially created by the authorities on both parts of the island to keep working people apart. And so, people of all faiths and none travelled to fight in Spain.

Many had already been exiled – banished by an establishment that recognised the danger their ideas posed to the new regimes created on both sides of the new British-imposed border in Ireland. The Irish left their new homes in America, Canada, England, Scotland, Australia, New Zealand and elsewhere.

The loss of so many left-wing Irish republicans in Spain and the forced emigration and expulsion of those who returned left a country bereft of its working-class ideologues. This is a legacy that Ireland has yet to recover from. What a different country we would live in now had they lived to fight another day!

And to compound this, the Irish ruling classes and the Catholic Church recognised how dangerous an inspiration the ideals of these people would be and so they tried their best to bury these too.

In school we were taught about the famous battles of World War I and World War II but we never learned about the most important battles of all: those fought in Spain. For those Irish who went to fight Franco were not fighting for empires or jingoistic narrow nationalism but for internationalism.

And so, the rich, the powerful and an education system in the iron grip of the pro-Franco Catholic Church tried to write out of history the war for a democratic Spanish Republic and the role played by Irishmen and women in supporting it.

Our presence and the growth in interest in our organisation throughout Ireland, especially among the young people, shows that they have failed.

It took a while for us to accomplish our modest goal of building our memorial here but with the help of Seve Montero, Elisa Retana and the Council of Rivas-Vaciamadrid, we completed our mission. In ways, its presence has become a catalyst for other monuments we have erected across the island of Ireland. These also symbolise defiance – their very presence mocks those who would write such selfless solidarity out of history.

Last November in Dublin we held the last of a series of events to commemorate the 80th anniversary relating to the activities of the International Brigades in Spain. As well as our ongoing work in Ireland, FIBI participated in all the major commemorations in Spain over the past four years.

The histories of our countries may be very different but in many ways the history of the working-class is strikingly similar. Put simply, the vast majority of people do not benefit from societies deliberately created to enrich the few at the expense of the many.

And in specific ways, the overthrow of the democratically elected government here in 1939 here had similar consequences to the failure of our revolution in 1923. It has taken us generations to rebuild but we are surely regaining our strength.

I’m sure you have shared our frustrations and anger over the years with those who would tell us to forget the past. For example, I remember after we left the Charlie Donnelly memorial in 2010 a well-dressed gentleman came up to us in Madrid and asked “Why do you bother remembering?”
We decided to simply ignore him but it would have been easier to reply; “Because we cannot afford to forget!”.

If anything, that answer would be more valid today than it was at the beginning of this decade.

Now, more than ever, the privileged seek to legitimise their tyranny by appeals to realpolitik, arguing that greed is an endemic part of human nature and in some perverse way that the amassing of personal wealth is actually good for a society.

But we know different because we know our history. We know there were people who lived before us who thought the same way as we do now. We have met them. Luckily, some of them are still with us to tell their stories.

We see inequality for what it is. We see fascism creeping back and taking hold and refuse to call it ‘populism’ or any other name. Fascism is fascism.

We realise that we are a continuation of those who struggled before us. They are our inspiration: they led from the front: they were people of action.

In a landmark speech at Jarama in 2007, Brigader Bob Doyle asked the question: ‘Did my comrades die in vain?’. It would have been easy for an old man to answer ‘Yes’ but Bob remained honest. ‘No’, he said, there is still a lot of work to do.

Twelve years later we are in a worse place. The new fascist world order that was coming down the track then has now arrived in the guise of neo-liberalism that has been long in gestation. Its rampant worldwide growth has been exponential. The new order is here. It is already a brutal life and death struggle for many and it’s on the march.

As in the 1930s, we cannot trust our governments to deal with it. So, we must join together to fight again and in so doing we recover the memory of our past to shape the future.

Failure is not an option. This time we are going to smash the chains of slavery and in so doing we give life to the spirit of the Brigaders. They played their part – now it is our turn.